It can be easy for us to forget sometimes that great things were done in the generations that preceded us.  Especially when it comes to an always evolving business like the movie industry.  I have grown up in the age of special effects and during an ongoing aggressive attempt to continue being creative and outdoing what was done before.  Yet, to the latter of those two, some things simply can’t be done.  This is a movie that seemed primed for a remake given the technology available today but when you go back and look at the original you see that nothing we could ever do today could even touch what was done before.  This is a political thriller that will keep you on the edge of your seat up until the end and then blow you away.  It has been a long time since I saw the remake and I remember liking it quite a bit but when we viewed this one again I can’t imagine it even comes close.

I love a movie that captures the paranoia that went on in the country during The Cold War.  It’s something we can hear about all day in a history class but I don’t think the message is ever really driven home.  When you learn about The Cold War the focus is always on the big events such as The Cuban Missile Crisis or the wall that divided Germany.  What I think gets overlooked is how crazy the situation got at home, the paranoia driven into Americans for political purposes.  The character of Senator John Iselin is an obvious reference to Joe McCarthy.  He has a list of names of people working within the government who are actually communist and although he can’t figure out how many names are on that list it hardly matters when he is putting on his show for the media.  The messages to the public is very clear, to the point that people don’t ask “are there actually Communist working in the US government,” but “how many Communist are working in the US government.” I discussed the Red Scare during our recent review of The Majestic; it’s a very interesting and troubling chapter in our nation’s history.  This movie is a perfect example of how some political figures could use that fear tactic to their advantage and it’s true that some did exactly what John Iselin did, to a lesser extent.

I think the biggest flaw in this movie comes from the acting because there is a lot of bad acting to go around.  I thought Frank Sinatra was really hot and cold throughout the film.  Sinatra may have been one of the coolest guys to ever live but this film does not do much to showcase his acting talents.  In truth I haven’t seen enough of his films to make an honest opinion of his acting ability.  The thing that annoyed me most about him in this movie had to be lip sweat.  In the movie he plays a character that is a bit overwhelmed with stress and I think he often looks sweaty to convey that stress but I found myself wishing the guy would just wipe off his upper lip most of the time. I also found it really annoying how he kept going back to the dream when he was trying to tell everyone his suspicions about Raymond Shaw.  He is clearly frustrated that nobody will listen to him but who the hell takes a dream seriously? Maybe they held greater importance in the sixties and I’m simply unaware.  Nevertheless, while I didn’t think Sinatra was great in this film I did like his part and I do think Sinatra was great.  They have been talking about making a bio pic about him for years and I’m always waiting on it. The man led a storied life that eventually needs to be brought to the big screen.

I have never seen Laurence Harvey in another movie but based solely on his performance in this film I think he was really bad at his trade.  He plays an “unlovable” character in this film but I found him to be “unlovable” as an actor.  Nothing about his performance in this movie was believable and if the movie wasn’t so good all around I think it would have brought the film down.  My favorite part of his character was when he told the story about meeting the love of his life, because I found it so hilarious.  This “unlovable” guy, probably a virgin, is snake bit and alone on the shore of a lake.  This beautiful girl, played by Leslie Parrish, rolls up on a bike and just happens to have snake bite remedies on her.  She slices his leg, puts medicine in it, but doesn’t have a bandage to wrap the wound.  She takes off her shirt and wraps his leg before riding away in her bra to get him help. I find this funny because how could this guy not fall head over heels for this girl? There is already the “Florence Nightingale Effect” to think of but when a hot woman takes off her shirt and wraps your virgin leg with it you love that woman forever.

The saving grace for acting in this movie came from Angela Lansbury.  Though she played a wicked part she was absolutely amazing in the role and actually received an Academy Award nomination for Best Supporting Actress for the part.  She didn’t win and that’s a shame because she was far and away better at acting than any of the stars who got top billing.  It’s been quite a while since I saw the show but I grew up with my mom regularly watching Murder, She Wrote and remember Lansbury mainly from her part on it.  That made her drastically different role in this movie seem even more compelling to me.  Janet Leigh actually got top billing for actress and I don’t think she played a bad part, just an unnecessary part.  Why was she in this movie at all? She has absolutely no significance to the film and I think she is only here because Sinatra needed a love interest.  She was a beautiful woman and although there is no reason for her in the film she is still nice to look at.

I am not overly familiar with John Frankenheimer who directed the film but I have seen one of his more recent films, Ronin. I thought that was an incredible movie and I liked what he did with this film although he may have been able to get more out of a few of his actors.  I specifically liked how in the film when we see the dream sequence from Major Marko it looks altogether different from the sequence we see when Corporal Melvin had the dream.  When Marko dreams it all the women are white and when Melvin dreams it they are all black. I think James Edwards was horrible in the scene when he wakes up but I liked that they two different characters dream things different through their own perceptions.  One thing that really did annoy me while watching the film was when Raymond accidentally hears his trigger in a bar and mistaken takes instructions to jump into the Potomac River.  When Marko is chasing him down it is obviously very cold outside because we can see the breath of the actors and the river does appear to be somewhat icy.  Yet, throughout the film we see all the characters sweating and at one point Raymond’s mother criticizes him for not having an air conditioning unit, implying that it is hot. This matters little but something about how it upsets the continuity seemed vaguely frustrating to me. Yet this movie leaves you with a bang.  Frankenheimer did an outstanding job putting together the film’s climax and delivering the big blow at the end.

With a current day remake around to grab today’s viewer’s attention I fear the original film might be forgotten behind it.  This is a mistake and I sincerely hope it doesn’t happen.  The remake, despite the efforts of those involved, does not even remotely match what this film was able to accomplish. It’s not even in the same league with this film and I now wish a remake had never been made at all.  It was watching the remake that eventually lead me to actually see the original but I have little faith there were others who went back to see what it was intended to be.  I you saw the remake and enjoyed it at all then this is a must see for you because it is better.  If you haven’t seen this movie or the remake then it’s still a must see because the movie is that damn good.  This movie is worth your time and if you are reading this I hope you seek it out and see it for yourself, you won’t be disappointed.

I had a hard time staying into this film. I guess it was because it was in black and white and for me just hard to follow. I felt like I kept getting lost. Overall I think I know what happened and I truly like the story. It’s always interesting to watch films about politics running amuck. 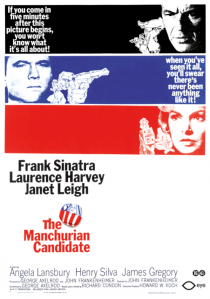 This is a really cool poster. It is simple, direct, simplistic and quite pretty. Today the typography would look a lot different in the black and blue parts, but I really don’t mind the typography of the title and the cast names. I can’t think of any modern-day posters that use this much white space and I just feel that’s a shame. Today we have to fit in so much nonsense into these posters to try and get points across, when personally I feel like simplicity is the way to go. DaVinci once said that “Simplicity is the ultimate form of sophistication.” I agree.

NEXT MOVIE: The Manchurian Candidate (2004)